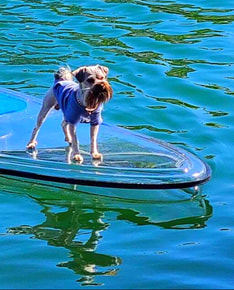 We started out in March 2014 on Madeira Beach with just a small fleet of stand up paddleboards and kayaks.  We worked with the chair & umbrella concession and we were actually the first company stationed on Mad Beach that offered sup & kayak rentals.

In 2017, we partnered with Treasure Bay Resort & Marina to offer amenities to the guests and we gained a dock for our guests.  Treasure Bay Resort has the marina on the intracoastal.  You can get on your kayak from the dock and paddle to John's Pass which is about a mile away.  You can also use the pool, hot tub, shower, and rooftop Cabana Bar.

Chewbacca, AKA Chewy, The Dock Dog... The Bike Dog...  The Adventure Dog... joined the team in 2020 and quickly became the company mascot.  He likes to join the guided paddle adventures and chase birds on the sandbar and he also enjoys riding on the electric bikes and running alongside!

We added bicycles and electric bicycles to our rental fleet.  And now we have Tommy Bahama Beach Chairs & Umbrellas, YETI & RTIC Coolers, beach carts, some great DEMERBOX bluetooth waterproof floating speakers, and a premium amphibious beach wheelchair because we wanted to offer a superior beach wheelchair than the other guys.  You can push it right into the water.  It has some serious fat balloon tires.

We've accumulated numerous positive reviews over the years and you can be assured that we will treat you well too.  Come on out to have some fun.  Meet Chewy.

Read some of our reviews